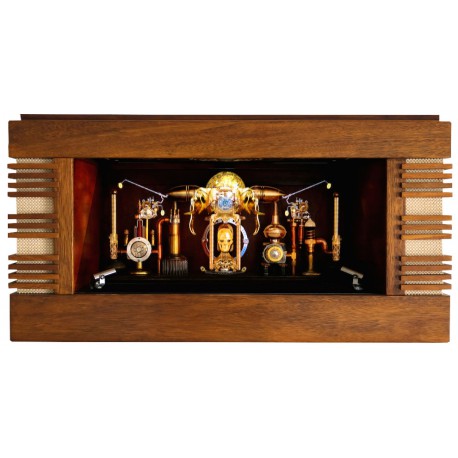 This artwork is no longer in stock

Post-Industrial Oneiric Archaeology presents a nature morte made of obsolete technologies which have been brought back to life through the projection of a virtual scenography. The combination of these seemingly unrelated, physical and virtual elements transforms this composition into a re-animated exquisite corpse. As in other works of the series, the animated composition is approached with a musical sense of rhythm and balance.

The design of this artwork evokes the style of Art Deco radios from the 1930s and 40s of the 20th century, which are characterized by an aesthetic development beyond their funcionality; there is a explicit intention in these designs towards the visual impact of the device. It was a time of political revolt and financial crisis, in ehich the radio became much more than a means of communication; it symbolized the era of the machine, a new future and, as such, it became a builder of realities.

The confluence of augmented reality and antique magic tricks in this work, suggests a meeting of past and future in the constantly mutating instant. Other nods to history include iconography which reminds of the Dutch and Flemish Vanitas, still life paintings from 16th & 17th centuries, aimed at capturing the passage of ephemeral elements, such as time and light.