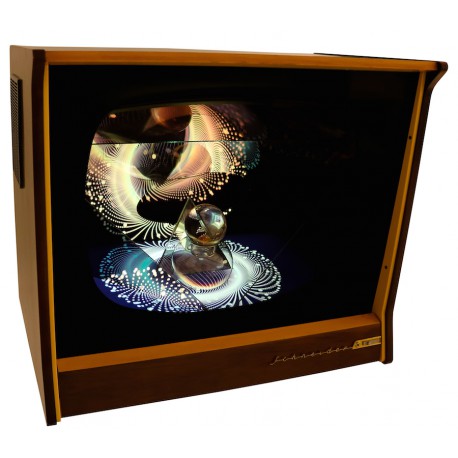 Move your mouse over image or click to enlarge
Forrige Neste

Edition: unique within a series of 5

InfiniTV unfolds within a rare, vintage (1950s) TV set. It offers an unusual exploration into multi-dimensional compositions with various layers of refraction, diffraction and reflection which suggest an infinite depth. The time dimension is also included through the rhythmic sense of the animated composition, together with the evocation of travelling back in time.

On one hand, the piece is a tribute to the obsolete technology it uses; on the other, it draws attention to the contrast between old and new media: a contemporary LCD screen is contained within an older version of a similar technology (1950's, valve TV set).

Unlike some other recent artworks by Nourathar, in InfiniTV  the magic trick – the light source - is not hidden; it becomes instead a central part of the composition through the continuity in space of the light it emits.